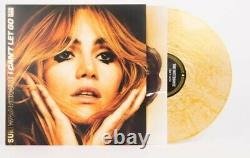 We trace where we've been and reveal where we're going. However, Suki Waterhouse catalogs the most intimate, formative, and significant moments of her life through songs. You might recognize her name or her work as singer, songwriter, actress but you'll really get to know the multi-faceted artist through her music. Memories of unrequited love, fits of longing, instances of anxiety, and unfiltered snapshots interlock like puzzle pieces into a mosaic of well-worn country, nineties-style alternative, and unassuming pop. She writes the kind of tunes meant to be grafted onto dusty old vinyl from your favorite vintage record store, yet perfect for a sun-soaked festival stage.

These compositions comprise her upcoming 2022 full-length debut album, I Can't Let Go [Sub Pop Records]. The album is called I Can't Let Go, because for years it felt like I was wearing heavy moments on my sleeve and it just didn't make sense to do so anymore. There's so much that I've never spoken about.

Writing music has always been where it felt safe to do so. Every song for the record was a necessity. In many ways, I've been observing my life as an outsider-even when I've been on the inside.

It's like I was a visitor watching things happen. Growing up in London, Suki gravitated towards music's magnetic pull.

She listened to the likes of Alanis Morissette and Fiona Apple. Meanwhile, Oasis held a particularly special place in her heart.

She initially teased out this facet of her creativity with a series of singles, generating nearly 20 million total streams independently. Nylon hailed her debut "Brutally" as what a Lana Del Rey deep cut mixed with Joni Mitchell's'Both Sides, Now' would sound like.

" In addition to raves from Garage, Vice and Lemonade Magazine, DUJOR put it best, "Suki Waterhouse's music has swagger. Constantly consuming artists of all stripes, she listened to the likes of Sharon Van Etten, Valerie June, Garbage, Frazey Ford, Lou Doillon, and Lucinda Williams. In late 2020, she finally dove into making what would become I Can't Let Go.

"I've been dreaming up this record for years, " she recalls. The weeks I spent in North Carolina with Brad were by far the best of my life. The first single "Moves" illuminates the nuances of her sound. Guitar echoes through soft piano and a veil of reverb. The momentum builds, and she warns, I might put some goddamn moves on you, babe I know you need it. "'Moves' is a song I first started writing one night on the couch, picking up the guitar and seeing what came out, " she explains. It was a moment where I felt the urge to both sever a previous bond, while putting my faith back in trying a different path.

I often think,'what happens when you are struck by someone who changes the course of your entire life? The song speculates on that journey, one that moves beyond lust and physical longing, where you know that you now have something to give. The companion single "My Mind" pairs breathy vocals with an airy riff paced like a tumbleweed as her angelic hum takes hold. Next up is Devil I Know.

" A sparse beat trudges in tribal-style rhythm, while she leans into the cataclysmic chorus, "Back in hell at least I'm comfortable, need your body when my fire's gone. There is also "'Melrose Meltdown, " which Suki describes as A shattering of illusion, undoing from a cage I'd been kept myself in where I'd thought was safe. It's a sweeter send off, but there is an anger there when I sing it'. I Can't Let Go culminates on Blessed. " Her voice ebbs in and out of the cracks between lightly strummed guitar and delicate synths as she exhales, "I could be something.

"'Blessed' was right at the end, " she goes on. It's a song about the delicacy of family, a reflection on the moments that tested the fabric of it, when supposed light contains shadows. Ultimately, you're cherishing the mistakes. In the end, Suki not only catalogs her life up to this point in the album, but she also fulfills a lifelong ambition. "When I've been stuck or feel out of touch with a sense of inner meaning and outer purpose, I've found both through searching my memories and finding those events buried in the shadowy areas of the psyche where they were ignored, " she leaves off.

So many times of change in my life have required return visits-especially at the transitions through to the next stages. The album is an exploration of those moments when there is nothing left to lose. What is left and can't be thrown away is the self. This item is in the category "Music\Vinyl Records". The seller is "mr_mystified" and is located in this country: US.

This item can be shipped to United States.