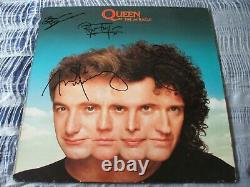 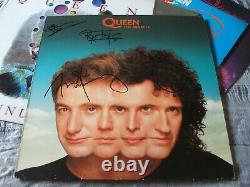 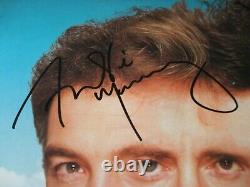 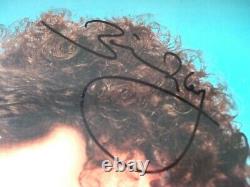 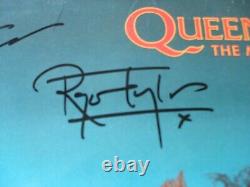 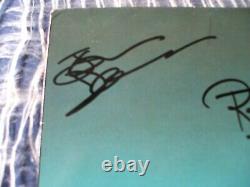 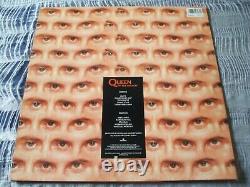 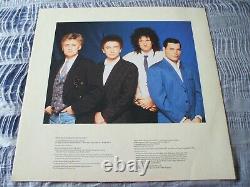 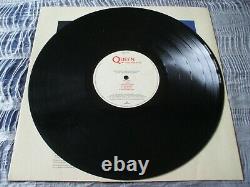 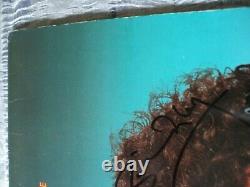 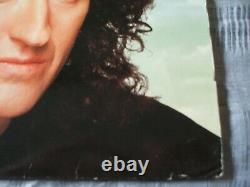 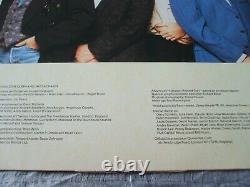 Sleeve autographed by the whole band (including Freddie Mercury). Freddie Mercury's autograph is prominent in the centre of the sleeve across the foreheads of Deacon, Taylor and himself.

Brian May's autograph is also in the centre to the right but is slightly obscured by his hair! John Deacon's and Roger Taylor's autographs can be seen in the top left-hand corner.

I can't authenticate the autographs however, they look good to me. The album came with a collection of Queen LPs and this was the only album which was signed (please see attached images, only this album is included in the sale). I understand that when this album was released that Mike Read gave away (as part of a competition) a number of signed copies and I would hazard a guess that this could have been one of those copies. Another thing which suggests the autographs are legitimate is that this copy has been played and enjoyed.

The sleeve is still in solid condition but displays wear. The wear is particularly prominent around the edges with light creasing and wear to the corners. There is an impression to the opening edge of the sleeve on the front (captured in one of the images) which looks like a paperclip has been attached to the sleeve at some point (presumably in relation to the autographs). This sleeve is graded as being in very good condition and would still look amazing framed. Many marks are visible under an intense light and the surfaces are a little dirty.

The inner sleeve is quite crisp and has clearly been handled with care although the record has come through the bottom of the inner (but hasn't come through the outer sleeve). Again, this would look great framed (and the artwork lends itself to the autographs unlike some of Queen's albums which don't feature band portraits) and represents a solid investment. I would say my grading is on the conservative side however, it is also realistic. Realistic in the sense that sometimes even brand new records are not immaculate. Some items are play-graded and where this is the case it will be noted in the Item Description.

Ultimately, the vinyl will look like it has just been made. When used to describe a sleeve it will mean that the sleeve has no shelf-wear or storage damage. The sleeve will look like new. There will be an indication that the record has seen some play but not heavy play. When viewed under an intense light only the tiniest, wispiest hairline markings will be present and not excessively so.

The vinyl will retain a great sheen. A sleeve described as EX+ will display minimal shelf or storage wear including an. Crease or the stubbing of corners, slight fraying to the opening edge. Ultimately, the sleeve will still be a superior example.

Superficial surfaces scuffs may be present but no marks of real substance i. Under an intense light it is likely that a relative volume of hairline marks are present.

A sleeve described as EX will display shelf or storage wear including creasing, loss of print (due to rubbing), possible stubbing of corners etc. The sleeve will not display any. Ultimately, it will be a solid copy. I will rarely list vinyl for sale described as VG+. Any vinyl listed as VG+ will have a detailed condition description included in the listing. The description VG+ is more often used to describe sleeves. Often VG+ describes the condition of a sleeve which was of very cheap manufacture (think 1970s EMI sleeves or Polydor late 60s/early 70s) and therefore more prone to display the vagaries of time. A sleeve described as VG+ will not be a basket case. It will likely display a reasonable volume of creasing, a reasonable amount of rubbing/stubbing and possible the odd substantial flaw. This means items with a start price. Items which have a start price. The item "Queen The Miracle ORIG 1989 UK Parlophone LP AUTOGRAPHED incl. Freddie Mercury" is in sale since Sunday, July 25, 2021. This item is in the category "Music\Vinyl Records". The seller is "jesusspokesmoke" and is located in Guildford. This item can be shipped worldwide.